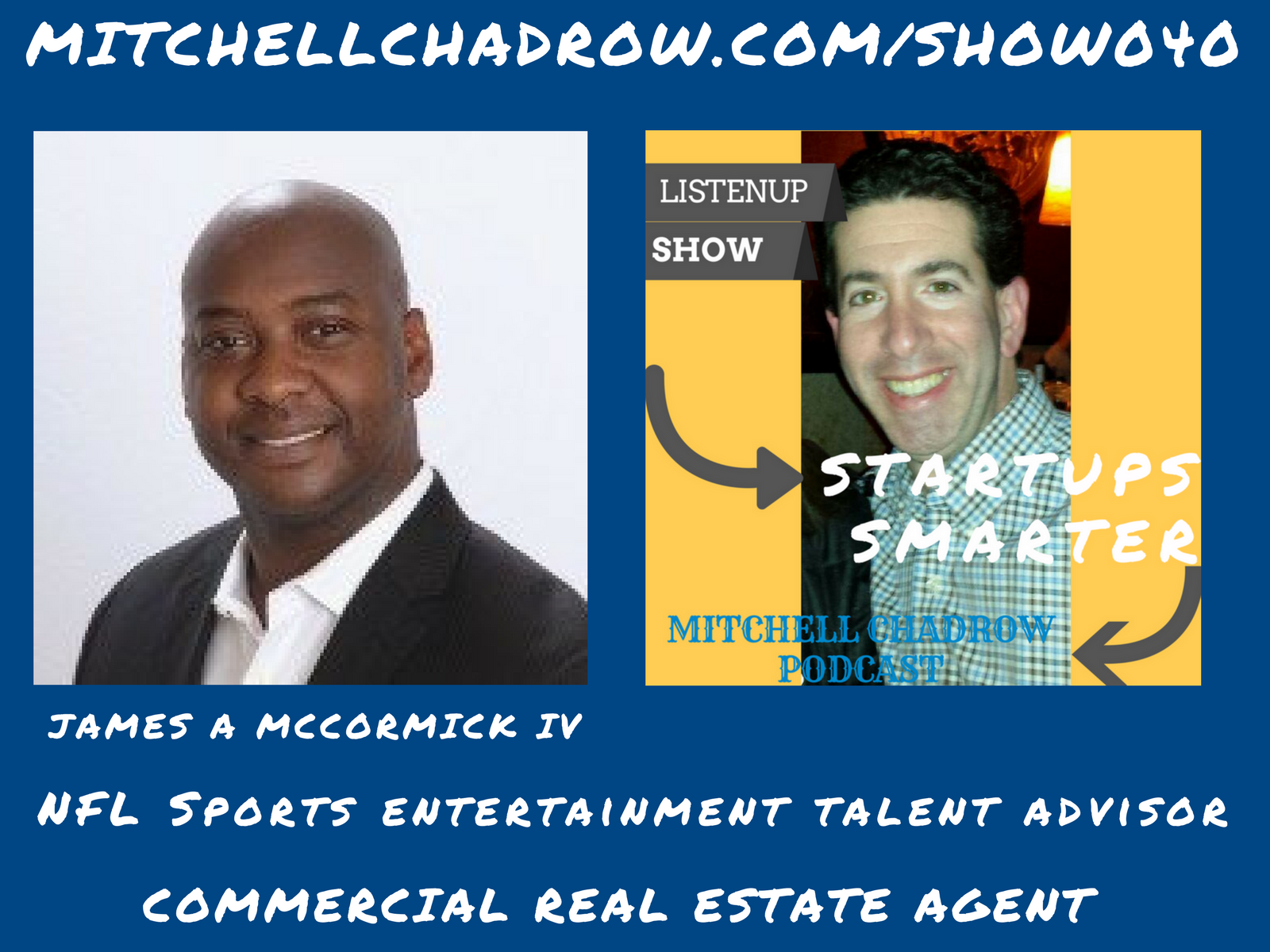 James A McCormick, IV was a NFL sports entertainment talent advisor and now a commercial real estate agent.  I first interviewed James McCormick IV early last year.  At that time James was in the process of developing his own media property called Sauperfly Media Group.  Sauperfly is a luxury lifestyle digital media brand company focusing on luxury and lifestyle.   His audience is individuals inclined to evolve their taste level. It’s designed to function as a community where style + culture intersect.

He does that through creating original editorial content both curated and original which includes, interviews, video content and social media.   event management as well as branding services.   Sauperfly focuses on fashion, art, travel, fine dining, and music.

We talk to him about the lifestyle brand and setting up a digital enterprise – the media membership side and merchandise side.

You may recall that he is also involved in the <a href=”http://mitchellchadrow.com/nfl-sports-entertainment-talent-advisor-commercial-real-estate-agent-james-mccormick-iv-show-040/”>commercial real estate industry</a>.

James is from Philadelphia and you may recall he worked for the Eagles.  I could not wait to talk to him about the new Super Bowl champs and get the inside story from the players he still keeps in touch.

James has a passion for creating and sustaining a strong community which his says will allow him to venture into the world of E-Commerce.

So how is he going to make money with this startup? He will introduce branded merchandise as well as limited items via brand collaborations.  He also envisions a creative division that will focus on events, branding &amp; influence marketing.  He wants to use his global media brand to speak to individuals and organizations who are sophisticated &amp; always evolving.

James A McCormick IV is an NFL sports entertainment talent advisor and also a commercial real estate agent for Sperry Van Ness.  It is always a good idea to have more than one stream of income coming in.  James is not the first real estate professional that we have interviewed.  We also spoke with Susan Matthews who handles the residential real estate market

What are some the things do we cover with James in this Listen Up Show.  James has deep ties in the commercial real estate market but he also earns from doing sports and entertainment.  I asked him about his time as league executive in the NFL national football league and his experience as a director of all player & talent marketing initiatives for the league; time at NFL films along with those struggles at Valley Forge military college.  For those who want to take a more passive role in real estate, there is a company called realtyshares that allows you to earn passive income in real estate.

Our guest’s stories are what really makes interviewing James so special.  He talks to us about his relationship with Troy Vincent the Executive Vice President of Operation for the NFL & the 2003 infamous Eagles NFC Championship year.

So what are his motto’s in life and what does he attribute to his success: be prepared, be Ready for the opportunity and always over deliver.  He built his own character at an early age from church, music and his family.

He coined a phrase: outwork the work – for all the things that must be done you must be the last person standing.  Be your own visionary, knowing where you are going.

Some key things to take away from the show:

1) Look within an introspective;
2) Center yourself to focus;
3) Master the key to executing on your ideas.

He also recalls two great football story’s the first is about NFL Films – Steve Sable, his mentor, Player Relations who has dealt with 80 producers, 12 networks: CBS, ESPN, HBO, NFL Network, the science of contacting current and former players, building trust and relationships, owners: Cris Carter & Bobby Taylor,
when Brian Westbrook – returned a punt against the Giants and went on to win their next 9 games that season, Donovan McNab, Duce Staley Playoffs Green Bay Packers 4th and 26th at Lincoln Financial Field in Philadelphia, no timeouts with the clock at 1:12 seconds pass to Freddie Mitchell David Akers made a field goal went into overtime Brian Dawkins intercepted a pass by Brett Favre returned it 35 yards set up another field goal for David Akers giving Eagles win 20-17 sent Eagles to third straight NFC Championship Game but they lost to the Carolina Panthers.  It will be awesome to speak with him about the Eagles Super Bowl win this year.