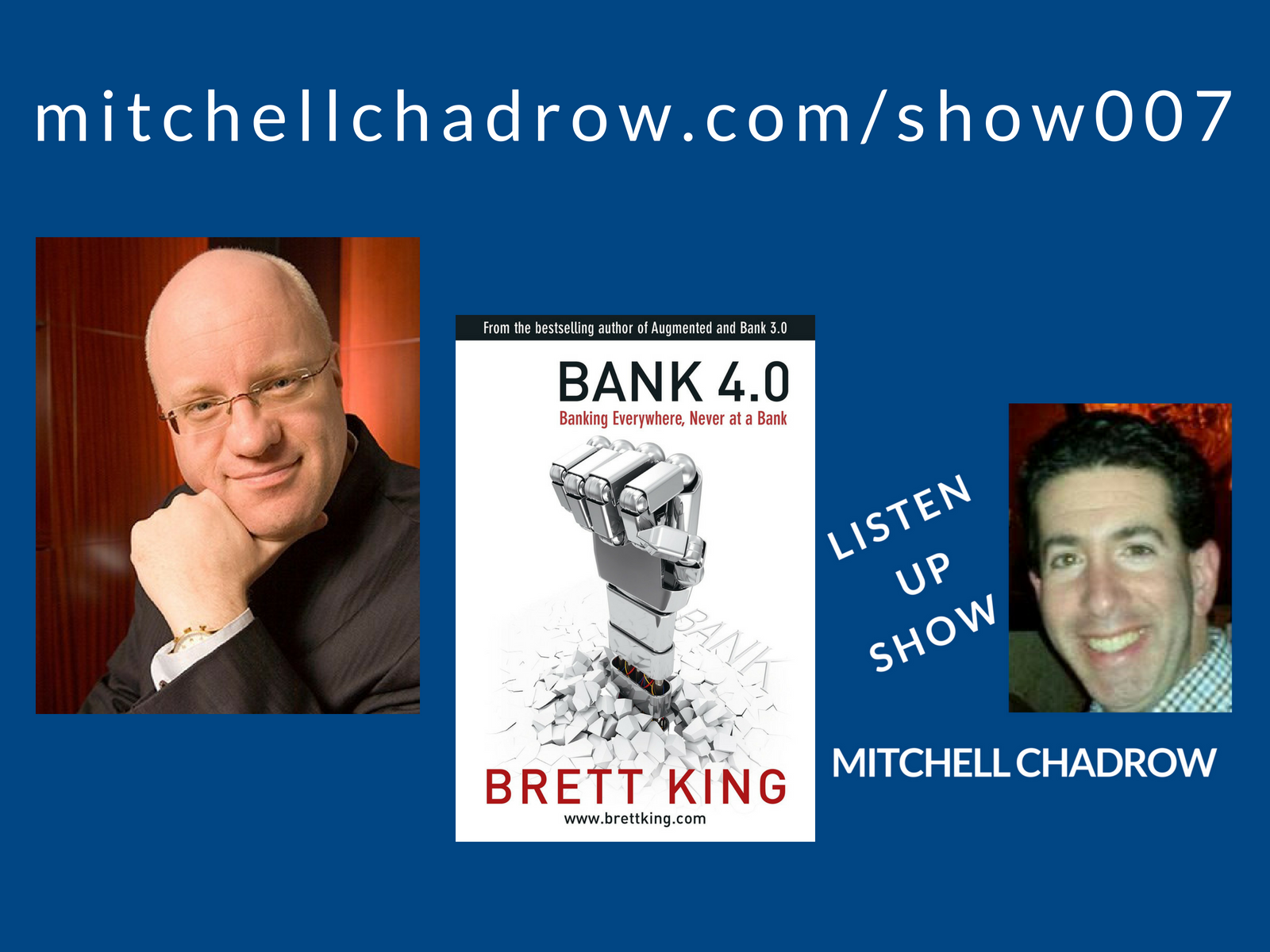 I first interviewed Brett King back in 2016.  It is now two years later and Moven a Mobile NeoBank is now raising money to buy a US bank.  SBI Group from Japan is providing funding and Moven Enterprises will create a joint venture with SBI Group in Japan.

What is happening to the boundaries of traditional banks, online banks, neobanks and the future of banking in 2019 and beyond.  Just Listen Up to Brett King!

Brett King will be back on the show when Moven closes and completes this acquisition of a US bank later this year.

For now, Moven is still a neobank and Moven works with Westpac in New Zealand and Moven’s partner in the US CBW Bank which provides customers with FDIC insurance.

In addition to being the Founder of Moven Brett king is also a podcast host, best selling author of five books.

His latest book is called Augmented in the Fast Lane and was found on China’s President Xi’s bookshelf during his 2018 New Years Greeting to his country.

Brett is originally from Australia and we discuss how business meets tech
and the future of banking.

He loves being on the speaking circuit and he embraced the future with the startup of the next generation Bank based on the smartphone called Moven.  Brett raised $24 million and the bank is headquartered in New York.

Customers can sign up for an account in less than two minutes, sent a card to use but now can just use their phone.

Breaking banks number one Fintech radio show on the planet

Brett speaks around the world on future of banking speaking in 39 countries back in 2015.

On the show he talks about how tech meets business.

Australia was his home country.
He started out as a coder, software developer, worked for the Publicist Group of Motor Media and ran a financial services training company in Dubai.

He has gone from Singapore, London to New York.

He discusses the aha moment he came up with the idea for Move n Bank now known as Moven.com.

What is the future of banking?

Moven is about banking mobile commerce payments but not a bank, not a telecom not a card company

Brett tells us it was a combination of passion and ego to redefine how people think of a bank account.

Spending meter start up app color to much if on Track

Look at meter before balance helps with decision

Cdw Bank fdic
Most customers see us not banks that

Talking to Betterment to offer an savings investment option

In p2p credit karma, Lender out of San Francisco Schel orloff gives you a little bit of money but helps you boost your credit score

Mobile bank account side per se simple tried to link up with Bank Corp.com and Betsy Cohen but when Google dropped their card program attached to their wallet them launched a year before Moven

Success I want to make a living from speaking – saw a Scientist speak at conference Dr. Michio Kaku – Physics of the Future: How Science Will Shape Human Destiny and Our Daily Lives by the Year 2100

Thought goal would be speak write books retire at 50

Use an app to change behavior

Only an equity investing now

From banking disruptor we have the blockchain

Biggest one for finance is advice (just got Smarter!) totally disrupted by artificial intelligence and technology and If you are an advisor in the financial services space right now robo Advisors vs humans robots will be better at investing then humans – > they will know your investment behavior better than a human relationship manager ever could adjust and adapt quicker so you can put in tolerances they won’t have to remember to call agent to sell this asset class or that it will know if gold drops below 1100 an ounce do this then sell it all automatically managed by a robo advisor

More importantly that advice itself has changed its becoming real time

Prism money
Bill guard that was acquired by Prosper

Best business advice:  In approaching a prospect or current customer ask the following question: What are three things or problems that I can help you solve today.  One of those three is a solution you can help prospect or customer.